I HAD THIS MATE…

Once upon a time, and that time has long gone, and I am much the better for its passing, I had a mate. Like all of my mates, he was special. But unlike every other mate, his specialness was unique to him and him alone.

He loved riding, which is the prime reason why were such good mates.

I see no point in having friends that do not like riding bikes. Unless they’re lawyers, because lawyers are handy as hell to have as mates.

Anyway, this mate was not a lawyer. We got on just fine anyway. But he tended to stretch the bonds of friendship unto breaking with what ultimately became monotonous regularity.

You see, his problem – and it was a problem, and while friendship demands that we overlook our friend’s problems and try to assist him through these problems, this became impossible – was that he crashed his brains out all the time.

And I mean: All The Time.

At first I thought it was just bad luck. But how many mirrors can a bloke break?

He crashed the day I met him in a pub in Burwood.

Not a big crash. Just one of those U-turn, front-brake incidents that always catches young players when they tuck the front-end at walking pace. It was kinda funny. We all laughed. Even him.

Two days later, he crashed again. Into the side of a car as he was lane-splitting behind me. Actually, it was into the sides of two cars and the back of a third. He broke his hand that time. I laughed anyway. It was funny because he wasn’t dead.

He healed up a bit, and was back on the road in no time. And then it began – a relentless cascade of road trauma that saw me visit every single hospital in Sydney (and a few regional ones) at least once.

It was equal parts fantastic and appalling.

He hit roadworks at speed on the entry to Gladesville bridge and low-sided himself into the road-crew.

He hit a dog and ploughed into an old lady’s front fence in Ashfield.

He rear-ended a taxi in Peak Hour on George Street.

A sheep took him out on the Duckmaloi Road near Oberon.

A dirt-road near Cooma put paid to him one Australia Day long weekend and took most of his knee-cap off.

I stopped counting the number of cars he’d side-swiped while lane-filtering, but he was buying levers and mirrors for his bike in bulk, and his hands were a mangle of twisted fingers and exploded scaphoids.

His collar-bones became ash and misery. His gravel rash was so frequent he’d stopped healing and just leaked pus through broken scabs 24/7.

And still the crashing went on.

Corner after over-cooked corner on the Old Road, The Putty, the Oxley, and others without out name or reputation. He’d lost the front-end so often there were flat spots on the edges of his front-tyre.

Sometimes it was rider error and sometimes it was machine failure. Sometimes it was both. Chains would slip off worn sprockets, old tyres would deflate, subframes would crack, and loads would shift themselves down into his rear wheel. There was even one occasion on the Hay Plain when the petrol container he was carrying leaked and then caught fire, which produced a wonderfully entertaining comet-like effect for several kilometres.

His injuries mounted and became chronic. He often did not wait for everything to be fully healed before getting back on the bike. You’ll remember I told you he truly loved riding. And he would get back on that bike, plaster-casts and all, often doing many miles with his jeans stuck to his arse or thighs with weeping bodily fluids.

The rest of us looked upon him in awe.

How was this motorcycle-riding still a thing for him?

Lesser men would have realised this was a zero-sum game, understood they were not good at it, and moved on with a different form of transport.

None of us ever thought he would die or be catastrophically injured – and he wasn’t. He just kept on crashing and he just kept getting back on the bike.

He bought other bikes and crashed on them just as often.

There were no riding courses one could do back then, and we all learned by riding lots and lots. And he rode lots and lots too – it’s just that he usually didn’t make it home.

There was no advice we could offer him. Back then, you acquired skills by osmosis and did your best not to crash. Most of us succeeded to some degree.

But he never faltered. He never took a single step back. He never wondered or doubted if riding was not for him.

He just kept getting back on and coming for rides.

I think cancer got him in the end. It wasn’t bikes.

He never conquered either. But he never stopped trying.

And I think of him often. 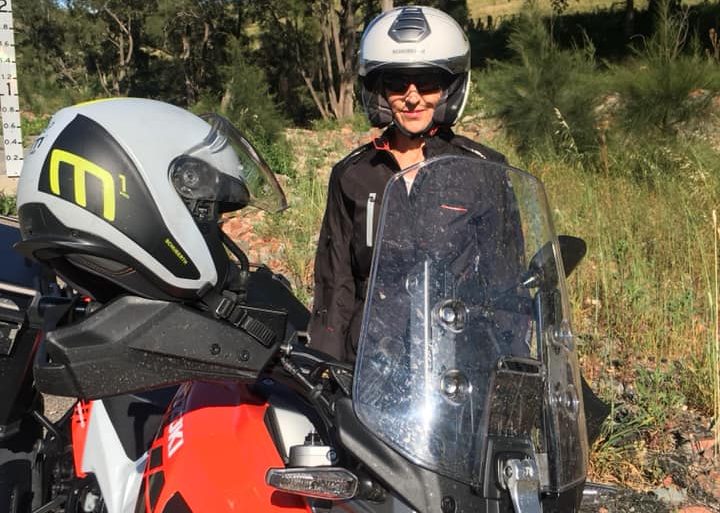 “YOU STILL IN HERE?”