Always listen to your wife because they know things...

“I’d like to go to Sydney and see our son,” my wife declared the other day.

“An excellent idea. We shall take the Rocket, and we’ll smash a 1000 shades of shit outta the Ten-Mile, and then I’ll show you what red-line in second and third feel like, and then…”

“Shut-up, fool. You scare me and I will poison your food. A nice, easy cruise on that lovely big bike and a pleasant lunch with Andrew is what I want. You can save your smashing and red-lining for your feral mates.”

If I knew what “high dudgeon” was, I would have stormed off in it just then.

But I figured a zesty 500-km day two-up on the Rocket would put both our souls at ease.

The next day, at seven am, we set off.

Now, the last time I pillioned Lynette through the 99 corners of Mother Putty’s legendary Ten-Mile, it was wet and we were on a Diavel. Today it was dry, and we were on a Rocket. Things would be different.

Most of its weight is down low, so it tends to change direction without much effort. But it does have a long wheel-base – so while it’s as stable as my loathing for Scott Morrison, it’s not what you’d call “flickable”. I don’t care. I’m too bad-tempered for flickable.

But what never fails to cheer me is the noise the Rocket makes. It produces a deep, booming “WWAAARRR!” howl when you climb into its revs, and then – and this is the best bit – when you shut the throttle it goes: “WARGWARGWARGWARG”, as if it’s rumbling and grumbling to itself at being off-throttle. It’s such a unique and pleasing noise, I’d be loathe to put a pipe on it if it changed that.

I stopped briefly at the lopped fig-tree at the start of the fun part. Lynette got off and immediately started wriggling in a most enticing manner.

“Just let me get my jacket off and chuck it on the ground!” I grinned. “And then we can make like frill-neck lizards in the weeds over there.”

“What are you talking about?” she snapped. “Soemething went down my back, and I’m just…there…hang on…”

“Just take off your clothes! I shall murder whatever it is even if it has sunk its fangs into you!”

“Leave my pants alone,” she growled. “It’s OK. It was just a bobby pin from my hair.”

Of course I was pleased some creature had not bitten her, but it was tinged with disappointment since her wriggling has always been like Kryptonite to me.

Anyway, halfway through the Ten-Mile, I slowed to ask my wife the correct question, which is always the same. “Are you OK?”

Her answer always directs what happens next.

“Are you even changing gears?”

A fair question, since Lynette has always been very attuned to what the bike I’m riding is doing when she’s sitting on the back. I know she can feel the gear-changes – especially when they’re those fast ones when you’re in the wrong gear and seeking the right gear.

“Not that often, actually.” Which was true. I had chosen to err of the side of smoothness rather than savagery, figuring she’d be much better company over lunch if I hadn’t spooked her appetite out of her.

I resumed my business. In terms of precision when entering a corner, a bike this size has no business behaving as well as the Rocket 3 does. In terms of punching out of a corner, pretty much nothing can touch it.

I took it easy on the straight bits south of Grey Gums and Lynette wanted to know if I was OK.

I rode faster. If the cops stopped me I would blame her.

All too soon we were contending with Sydney’s infernal traffic. Lane-splitting wasn’t an issue. The Rocket’s bags made no difference. Sure, it’s not R3-slim, but then, neither am I. It’s very easy to do low speeds on the Rocket because its balance and centre of gravity is spot on. You’re not sawing bars or paddling your legs – unless you’re crap at riding motorcycles.

What you do need to do is not be all sissy with the throttle on take-off. That engine needs to know you want it to go, so don’t be hesitant with the black happy-tube.

Also, be aware the Rocket does not even know you have a pillion on the back. I think I could strap a container full of washing machines to its seat, and it wouldn’t notice those, either. Because 221Nm.

Lunch was a lovely affair. But only due to the company. The food was execrable – an over-priced melange of bullshit Italian dishes that all tasted like bad pastry and worse tomato sauce. When my son quits working there, I’ll tell you where it is so you never have to go.

“Want to cruise home on the freeway?” I asked Lynette, mindful of her health issues.

“Gee, you kinda look like my husband, but you don’t sound like him. Best you not be here when he gets here,” she replied.

When we got home, I asked the hard questions…

Me: “So that was a longer day than usual for you on the back. How are things?”

Lynette: “I’m fine, actually. That sissy-bar pad makes a huge difference. It looks small, but it works really well when you accelerate, and it gives me a break on the boring bits.”

Me: “Does it make you feel powerful and awesome?”

Lynette: “No, but I know it makes you feel like that. You’ve looked down your nose at everyone who looked at you today.”

Me: “I’m a shameless size-ist! This is a 2500cc motorcycle! I have to look down my nose at everyone. Hey, did you see how those Harley riders we passed died a little inside? That was cool.”

Lynette: “Yeah, that was cool.” 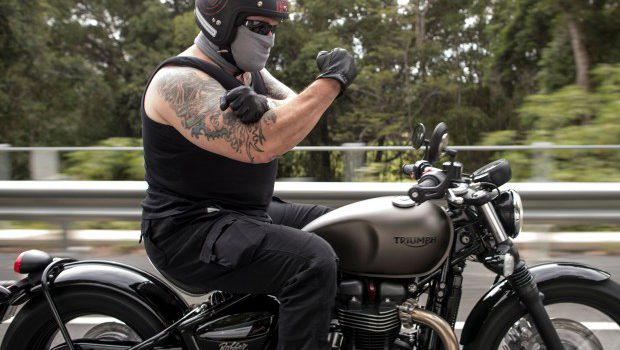 Previous
WHAT’S WRONG WITH THEM?

Next
GREAT FORGOTTEN BATTLES – THE BATTLE OF KOLUBARA