Our shame will be long and long...

There’s a lot to despise about Scott “Scummo” Morrison. He is a target-rich environment for loathing.

Everything from his supercilious lad-smirk, to his filthy and depraved religion, and the way he shepherds and protects that coven of misogynistic desk-jizzers and alleged rapists who rule our country, is worthy of nothing but hatred.

And you know what else it demonstrates? That a large part of our Anglo-Saxon population remains as stupid, ignorant, and xenophobic as it has always been.

Instead of trying to grasp what a massive act of utter bastardry Scummo committed upon the French, along with binding us to US Foreign Policy, and ceding our sovereignty to a power renowned for betraying its allies – because the USA has no allies; it only has interests – our bogan neo-culture has piled onto the French like footy-gronks after too many VBs.

It’s like they think this French Disconnection is a good thing, because in their dim, simian minds, the French are nothing but cheese-eating surrender monkeys, as that great philosopher, Groundskeeper Willie, once described them.

But where does this view come from? Is it valid?

Let’s have a look, shall we? Let us see if the French are indeed what the Anglo-Saxons – and it is almost exclusively an Anglo-Saxon thing – imagine them to be.

Because if they are, then Scummo’s yellow-cur behaviour can maybe be justified.

France has been around for a long time. In 600BC, Ionian Greeks founded what is now Marseilles. At the same time, Gallic Celtic tribes moved through the region and the concept of Gaul was born.

The Gauls were unwavering enemies of Rome, but eventually, after several hundred years, the Romans wore them down and they assimilated. The French language was born from Latin.

In 312AD, the Roman Emperor Constantine I, converted to Christianity, and as Christianity spread throughout the Roman Empire, barbarians continued to invade the region – The Franks (from whom the French take their name), settled in the north, the Burgundian tribes along the Rhine Valley, and the Visigoths in the southwest.

Fast-forward through the time of Clovis and Charlemagne, where no evidence of French cowardice was evident. Fast forward also through the troubled and blood-soaked times of the Dynasties – Merovingian, Carolingian, Capetian, and Bourbon.

Skim over the fact that French knights made up the vast majority of the Knights Templar and the Knights of St John Hospitaller. In the two-hundred-year-long Crusade to liberate the Holy Land, the vast majority of fighters were French. Such was the constant flow of fighters to the Crusades, the Arabs began referring to all the Crusaders as ‘Franj’, even though some fighters may not have come from France.

Cowardice? I see none.

Fast forward again, and we come to the 100 Year War with England. This generational conflict sowed many of the seeds of English hatred of the French, which exist in some form to this day.

Consider in this time the heroism of Joan of Arc and La Hire – bravery and sacrifice incarnate. And then remember the Black Death came calling and half of France’s 17 million people died.

Come now to the violent centuries preceding the cataclysmic French Revolution in 1789.  France essentially reformed the world and set it on the direction we now enjoy. It was a time of almost endless war and colonial expansion for France.

For almost 70 years, France battled the Hapsburgs. It also fought the French Wars of Religion for 30 long years, which killed some three million people. France then went to war with Spain, from 1589 to 1659.

Fast forward now some hundred or so years, and recall that the USA owes its existence to the French. There would be no Statue of Liberty (a French gift to the US) in New York Harbour had the French not fed the Americans with supplies and arms they used to defeat the English in the War of Independence, and then fought alongside them.

And now we come the Age of Enlightenment – where reason was to be what governed and legitimised mankind, and this was a French thing as well, and led directly to the French Revolution and the end of the rule of kings.

Liberty, Equality, and Brotherhood was what the French gave humanity as they hacked off the heads of their nobility, and the world changed again for ever – and for the better.

Fast forward again and consider that along with Napoleon – not a man remembered for cowardice – France gave the world the Napoleonic Code. Which is essentially the Rule of Law, that thing Scummo and his alleged rapist mate, Porter, like to toss around as if they knew what it meant.

Fundamentally, while the Napoleonic Code didn’t do much for the rights of women (which was normal for the time), it set the legal framework by which much of the world works, ie.

“Laws could be applied only if they had been duly promulgated, and then only if they had been published officially. Thus, no secret laws were authorized. It prohibited ex post facto laws – laws that apply to events that occurred before their introduction. The code also prohibited judges from refusing justice on grounds of insufficiency of the law, thereby encouraging them to interpret the law.”

Cowardice? I cannot see it.

Let’s go to WWI now, shall we? Perhaps French cowardice made itself evident there?

The Great War killed 1.4 million French soldiers – 30 per cent of all its soldiers conscripted between 1912 and 1915.

Of all the nations which promised to assist the embattled Serbs (who lost 60 per cent of its army) on the Eastern Front, only the French proved to be honourable. And it is thanks to the French the Serbs were able to expel the Austro-Hungarians from their land. To this day, the Serbs hold the French in great regard and are forever grateful to them for their great and honourable assistance. They do not consider them cowards at all.

THE QUEEN IS DEAD

In between wars, the French introduced social reforms such as annual leave, eight-hour workdays, and women in government. Unlike so many other places that now called the French cowards.

World War Two is, for our purposes, where the French seemed to have been enshrined as cowards. France was quickly defeated by Nazi Germany – which action also heaved the chest-beating Poms off the Continent (remember Dunkirk?). The Germans also kicked the shit out of Poland, Yugoslavia, Czechoslovakia, and a whole bunch of other countries – none of which earned the “coward’ sobriquet.

In addition, the Germans hauled off and murdered 160,000 French citizens (including 75,000 Jews), and yet the French fought on underground – against the quisling Vichy government and the Nazis, and eventually joined the Allies in liberating their country.

Yet, somehow, the French remain “cowards” in the eyes of many Anglo-Saxons – especially Australians.

I do not get it. I really don’t. Is a country to be judged for bravery only by its failure to stop the Nazis?

Or should a nation’s bravery, its resilience, its national pride, and its contribution to the world be considered in the light of the sum of all its achievements?

This is the country Scummo stabbed in the back while he sold out Australian’s foreign policy to the Yanks.

This is the country which was dealt with so dishonourably by Scummo. An act the French, for whom honour is a real and true thing, will not soon forgive and will never forget.

The debt the world owes the French cannot ever be repaid. And for Scummo to treat them with such arrogant contempt beggars belief. For our bogan-lords to then pile on with the “surrender monkey” bullshit is beyond the pale.

The subs we contracted to buy from the French were originally nuclear subs. But they ran on low-grade uranium – not the weapons-grade stuff the US subs run on. But because we are massive dickheads, we demanded the French install diesel engines into the bastards – and so began the delays.

And then Scummo made his deal with the US because the US told him to. And he always does as he’s told when it’s the US doing the telling.

We have not only pissed China off even more than it’s already pissed off with us – as great an Aussie “Hold my beer!” moment as ever there was – we have also pissed off the entire EU – our third-largest trading partner and showed ourselves to be dishonourable, untrustworthy curs too eager to fellate the crumbling American empire.

Scummo is a man without honour. That alone should disqualify him from the company of men. But it’s worse than that. He is also dumb. Pigs are smarter, so he’s not pig-dumb. He’s dumb on a much deeper level. Of course he is. He’s a Pentacostal Christian. That right there indicates a man incapable of critical thought. A bag of dirty nappies has more smarts.

And this bag of nappies has seen fit to enter upon the Great Game that plays without end on the chessboard of the world. He does this without a thought of consequence. He does this, smirk ablaze, without considering the implications, unaware of diplomatic nuances, and bereft of any semblance of humanity. 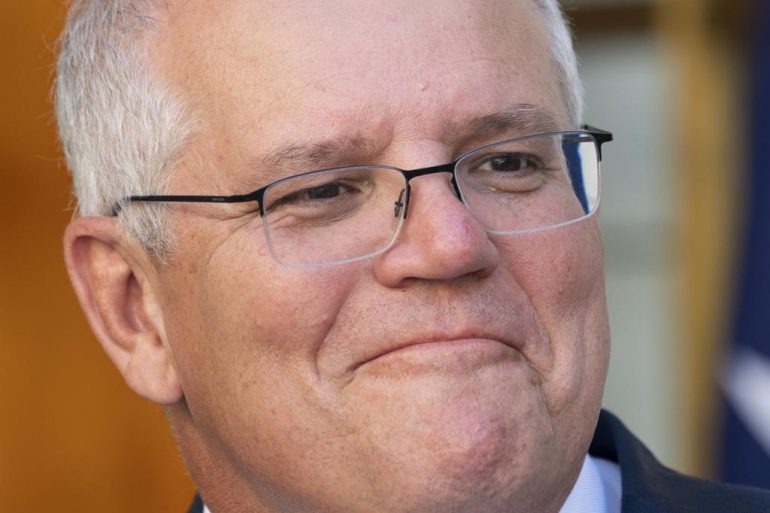