Let’s just speak briefly about the whole Ride Mode paradigm, and then never mention it again.

That said, I’m sure some of you are doubtlessly enamoured of the whole Ride Mode button thingo.

Yes, that’s the one where when you press it, your bike’s computer changes the engine mapping and your bike feels different. I’m sure youse are the same dicks who think a key-fob is a worthy replacement for an actual key.

But let’s just fixate on the Ride Mode Thing. The Fob Thing is a whole other subject I’m too full of hate for to cover at this point in time.

Most bikes have three modes, but lots have an extra two which you can program almost like you have the vaguest clue about what you’re doing.

All my friends ride. I don’t even know people who don’t ride. And many of them have high-end bikes with all the technological wonders such ownership entails.

And do you know what?

Not one of them, not ever, not on any of the many rides we’ve been on, has ever held up his hand and brought us all to a halt, and said: “Hang on a sec! I’m just gonna change engine modes because it’s raining/the surface has changed/I’ve had an aneurism”.

Do you know why none of them has ever done it? No, it’s not because the tech is so good these days you can do this on the fly on most bikes. It’s because they are not strobbing wankers with a burning desire to be kicked to death.

Everyone I know who has a bike that has these changeable engine modes finds one they like, and that’s where the bike stays – rain, dirt, or pants-shitting aneurysm.

Surely even the biggest anoraks understand this whole changeable engine map thing is a gimmick? Sure, it’s a great way of making 200 horsepower manageable by a muppet with the riding skills of a goat, but once said muppet has found a workable map, it’s job done. Ride on, o muppet.

I am a great and true believer in many of the modern rider aids. I think ABS is one of the greatest things ever invented, and it’s kept so many of us from the traction ward, despite what some of the more ridiculous dickheads attest on social media. Chief, you’re not going to out-brake ABS. You’re just not. So it’s a great and good thing. As is cornering ABS and to a lesser degree, traction control, though I could mount a solid argument in favour of not having that when there are hot bitches watching.

But the switchable engine modes? Come on. It’s not as if you’re a high-end pro-racer so sensitive to the nuances of your power-delivery that you feel you have the wit to screw with it.

Because you’re not, you know. So very, very few of us are. And as you might understand, the pro-level riders out there almost always turn off every electronic rider aid so they can stare Death down on their own terms. I get that.

I also get it’s nice to have options where you decide what kind of power delivery you’d like on your bike. That, as far as I’m concerned, is the ONLY plus to having switchable engine modes – so pick one, and leave it there. You’re not suddenly gonna be able to ride your Panigale with greater skill if you start flicking between modes.

In all honesty, and from what I have seen, most riders would be much happier tooling around in Rain mode even when it’s sunny.

One of the biggest-selling bikes of recent times was the Yamaha Tenere. Great value for money, and a bike with no engine modes. You ride what you get.

Creating bikes with staggeringly complex electronics adds to the cost of the bike, and allows the manufacturer to tell you it’s “all new” – which it is as far as its CPU is concerned.

And of course, staggeringly complex electronics add an entirely new dimension to the amount of suffering you’ll be in when those electronics choose to have a conniption. You won’t be fixing that with a screwdriver and a rock any time soon.

I am not one of those fools who looks back on the 70s, 80s, and 90s, with any kind of rose-coloured nostalgia. The bikes back then were diabolical in so many way, and we are all much happier and faster with today’s crop of machines.

Yes, I know some of you dodderers believe you ache for the pounding only an SS Ducati could provide, or the angst only that six-neutral gearbox on an old Guzzi would give you, but I’m thinking your meds might be dialed up too high.

The Good Old Days were anything but good. I’m pretty sure none of you are in a rush to replace your marvelous modern riding gear with that smelly old Belstaff shit.

We are blessed to be living and riding in a time when bikes are truly marvels of engineering. They give us joy and pleasure, and thrill us to the very core of our being. As they should.

But I’m convinced anyone who is unhinged enough to go swapping his engine mapping as he wobbles along the road has completely forsaken whatever magic motorcycling may have once offered him.

And it sucks to be that guy. 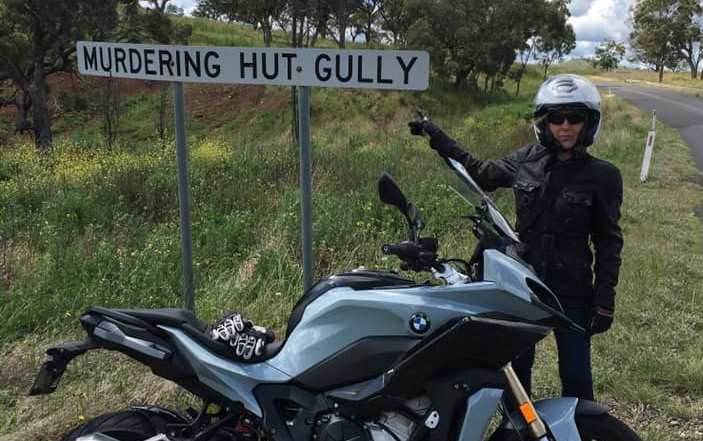 Next
SHIT MY WIFE SAYS – MY ILLNESS