“Technology, like art, is a soaring exercise of the human imagination.”

Every single time I get on this thing, the technology assisting it to hurtle down the road staggers me. That it has come to this in my lifetime is hugely pleasing…but quite dizzying at the same time.

I recently spent a lot of time on BMW’s R18B, the “other” Bavarian bagger. My last piece on the K1600B drew some comparisons between the two in general terms – but it’s impossible to get a grip on either of them without considering the tech they’re both wielding. And how it spins me out.

Both bikes share much of the same computer wizardry which you can access, program, or simply behold, on the big flat-screen television BMW has fitted above the handlebars.

The Marshall sound system on the R18B is better than the sound-system on the K1600B – this means it can be heard at a slightly higher speed – but let’s face it, you shouldn’t be listening to Beyonce at 180km/h anyway.

The R18B does have something the K1600B doesn’t – and that’s the radar-controlled cruise control. Engage the cruise control, and the R18B fires a radar beam out of its face. If that beam encounters a vehicle ahead of you, it will slow the bike down. A good thing designed for German Autobahns where good drivers engage in good driving most of the time – and speeds are quite high.

The radar-enhanced cruise control works the same way here, but since Australian drivers are essentially a collection of poorly-skilled antagonistic freaks who do not believe in the concept of an overtaking lane, it’s largely an exercise in 110km/h frustration. Turn it off. Ride happy.

The K1600B doesn’t have the radar. Do not worry. You won’t miss it. What the K1600B does have in terms of technology is, quite frankly, breath-taking.

Yes, I am aware we live in an age of astonishingly brilliant motorcycle electronics. It’s at the point now where we tend to take them for granted because they are so ubiquitous, and…well, so seamless in their operation.

But I was first programmed to ride bikes when the only thing keeping you away from the surgeon’s saw was your right hand. Now it’s a cornucopia of alien-looking stuff stamped with “Bosch” that watches your back.

And to say the K1600B is “fully loaded” with such modern wonders is not an understatement. So is the R18B, but given you can’t hammer the R18B as hard or as fast as you can punt the K1600B, the K’s tech-offerings – and overall bent – are slanted more to that hard’n’fast side of life.

So first there’s the engine. BMW made its bones building sixes, so it’s very good at that configuration. This year’s engine has been greatly improved with new knock sensors – no, it won’t yet run on kerosene, but you can get away with lower-octane petrol if you must.

The up-and-down quickshifter is glorious. Just stay on the throttle on the upshift, and it’s all silk. It’s one of the best units there is, and it’s so easy to just pour the power on, and on, and…well, on, until the sirens start. And as I mentioned previously, what’s really cool is the “Harrumph!” noise it makes when you’re downshifting hard. Who says these new engines lack character?

The electronic suspension is a solid improvement over previous models, too. Six-axis sensors play in time with two displacement sensors front and rear. You don’t even have to think about stuff like loads, or if your partner has had one too many pies. The bike senses what’s on board, and sets itself up – damping, ABS, traction control, and engine response – all rejig themselves, and away you go. You don’t need to do anything – and indeed, you can’t. The K1600B is not disposed to permit you any input – which is just as well. Most of us have no idea anyway.

Parked it awkwardly? There’s a reverse gear. Need more wind in your face? Press the button, lower the electric screen. Need a quiet bubble of air to ride in? Raise it.  Need warmer seats? Button. One for you, one for the pillion. Hand-warmers? It’s a BMW. That’s just standard.

But then there’s the whole interconnectivity thing. Plug your phone in, or just stick it in the dedicated compartment (which is fan-cooled…like, for real), if it will fit – and you have navigation, music, and phone calls via the BMW app. You will spend some time hooking it up, and your phone needs to be awake the whole time, and maybe, as Trevor Hedge pointed out in his review,  Apple CarPlay or that Android thing is simpler – but it’s all really quite amazing when you think about it. This is a motorcycle, after all.

But what a motorcycle – and that’s all due to the technology it is literally bristling with.

There are lots of switches and the BMW four-way wheel thing on the inside of the left hand-grip – all of which become very easy to navigate once you’re used to them, and obviate the need for a touch-screen. There are also four big buttons on the left-hand side of the fairing which can be programmed to perform whatever function you’d like. This is handy if you’re not keen on scrolling through two screens to get to your handlebar warmers.

The lights are all LED, the driving lights are standard, and they headlight peers around corners for you. It really is quite astonishing. The panniers even come with an adjustable cargo net, presumably so your expensive bottles of cognac don’t bruise themselves.

The K1600B is, by any objective measure, a proper triumph of two-wheeled technology. Nothing touches it in this area. The Goldwing is close, but the BMW has more road-presence, more luggage space, more grandeur, and goes substantially harder.

That’s the thing right there. You can bang on the K1600B. Quite seriously, in fact. When you first climb on, it feels like a vast starship, but it’s a bit of a fighter jet once you get rolling.

The comfort factor is off the charts. And rightly so. And I touched on that in the previous piece. I’ll get into that a bit more when I tell you how much my wife loves the whole thing.

I’m a huge fan. The K1600B ticks a lot of my boxes, primarily because there’s still a deal of mongrel left in me. And that mongrel just loves hosing poorly-ridden sports bikes into the weeds. You can feel their souls die a little when the starship sails by, says “Harrumph!”, adopts a respectable lean angle, and then…well, just heads off.

And the rider is not working hard at all. You wanna go fast on a Harley or an Indian, you have to work at it. And, sure, it can be exciting – terror is its own reward, after all. But on the K1600B, you can go much, much faster, and it’s not hard work at all. And it’s the technology that has made it that way.

I can see a lot of leathery, bearded traditionalists shaking their hoary heads and decrying the whole modernity of it all. As if cutting-edge tech somehow detracts from some pre-ordained “riding experience”.

You know what the riding experience on the K1600B is? Utter comfort, great handling, and wicked speed. There are no negatives in that at all.

But hey, if your happy with poor suspension, inadequate brakes, a top speed of 160-odd, and all for an image you’re not really able to rock, via con Dios, baby.

I know what ride experience I prefer.

Next time around, I’ll explore the entire pillion paradigm offered by the K1600B – and why I no longer have an excuse to go riding alone.

ALL THE SPECS, PRICES, AND OPTIONS CAN BE FOUND HERE.

PART ONE OF THIS SERIES IS HERE. 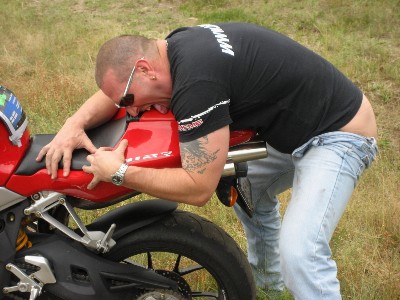 Next
SPARE US, HARRY – YOU ODIOUS TOAD…